Real Appreneurs Share How They Won Big in the App Store

The popularity of mobile apps has absolutely exploded in recent years. There are literally thousands of new apps in the marketplace every day. Many developers work incredibly hard to develop these apps – we’re talking blood, sweat, and maybe even tears.

Yet, the fact is that most apps fail to catch on with their intended audiences. While some apps fail due to poor design or lack of functionality, there tons of awesome apps that fail because people don’t even know that they exist!

If your app is going to be successful, it has to be discoverable. So, how do you make sure that your app is noticed and downloaded in a crowded marketplace?

According to vision mobile most mobile developers almost spend nothing on Marketing. 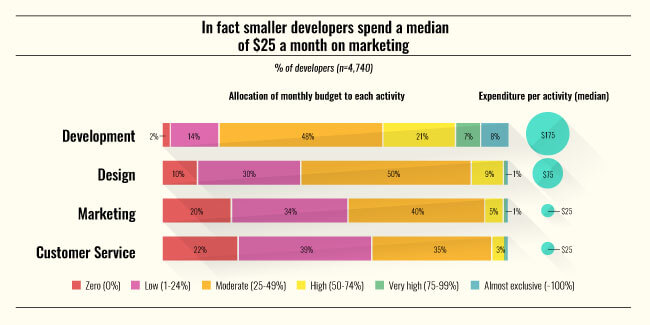 Ok so it’s obvious that not all apps are born equal, at least not when it comes to marketing budget size. So what would be the best moves to invest your energy in? And it doesn’t matter if you have a budget or not since any wrong move will waste your resources, be it money or time.

A quick Google search will show you that there are about a million possible ways to accomplish this goal – enough to make your head spin. But there are a four proven ways to increase app downloads, as shown by successful appreneurs who have actually done the work.

Successful appreneurs have discovered that occasionally dropping the price to $0 is one of the best ways to increase app downloads. Not advertising or social media… just making your app free. Why does this technique work?

Everyone loves free apps! Many people get alerts about free apps via popular notification apps like Apps Gone Free. Some app blogs also have special crawlers that let them know about recent price drops. That means that your app could be mentioned on a major blog. The bottom line? When you decide to go free, more people will discover your app.

But the benefits of going free don’t end there. Getting more downloads and reviews can help improve your app’s ranking, which increases discoverability. This is especially true if your app reaches the top in a category or country. So, even when the price of your app increases, you may be able to drive more downloads than before.

To show how it works, here are some real-word examples from successful appreneurs:

To put it in Stuart’s words, “the chart says it all.”

(U.S. Only)Tiny Wings does not offer in-app purchases, so revenue obviously decreased during the free period. However, the move had a positive impact on revenue in the long-term, due to increased interest in the app throughout the following months when the price returned to $0.99.

Get Featured in the App Store

Every appreneur dreams of have an app featured in the app store. Just imagine getting your app in front of millions of people! You’re almost guaranteed to get a huge increase in downloads. Let’s look at what happened to a few successful appreneurs.

Before being featured in the Apple App Store, Transit was averaging approximately 200 downloads per day. When Apple featured Transit in the Navigation category, the app was downloaded more than 18,000 times on the first day!

After being featured for the first time, Transit was also featured in the What’s Hot and the New & Noteworthy categories in more than 15 countries. According to Sam, this helped sustain Transit’s growth in the long term.

In a Cult of Mac interview, Jeremie reported that Mr Jump made over $74,000 from advertising and over $5,000 from in-app purchases just days after being featured. Unfortunately, there’s no one ridiculously easy trick to being featured in the Apple App Store… but you probably already knew that, right?

However, there are some things you can do to increase your chances of success. Getting positive reviews, good press coverage, and plenty of early signups will go a long way. Get Positive Press CoveragePeople download apps based on different factors, but one important factor is trust.

By getting positive media attention, you will increase awareness and start building trust with your audience. Let’s look at a few real examples.

Her PR campaign generated a significant amount of buzz on social media. People even wanted to know who her PR company was! But the most important thing was the results. Bazaart was able to go from 0 to 500,000 downloads with a very small budget.

Let’s face it, knowing how to build an awesome app doesn’t teach you anything about getting the media coverage you need. But the good news is that pretty much anyone can do it, you just have to be persistent.

A direct, concise, and relevant pitch gives you the best chance of getting press coverage. As an appreneur, it’s important to learn this skill because press coverage is one of the best ways to generate awareness and build credibility.

With startup networks, you can share your app and get valuable feedback from a community of developers and appreneurs.

Sharing your app can even result in new visitors, signups, and positive press coverage. For example, many developers have found success on sites like Product Hunt and Hacker News. Here is a real-world example.

After sharing his post on Hacker News, Tyler was able to attract another 2,000 unique visitors to his landing page. The cherry on top was when Prime received positive press in an Entrepreneur article based on his success.

Increasing app downloads is not an easy task. But these successful appreneurs proved that it’s possible. These 4 proven strategies were used to launch real businesses. With dedication and persistence, you can find similar success. If there are marketing initiatives that work well for your brand, think about adding them to your mobile app strategy. Always think about your audience and what works best for targeting them.

Do you have a killer strategy for increasing app downloads that has worked for your business? Let us know in the comments.