Everything you Need to Know About iOS 10 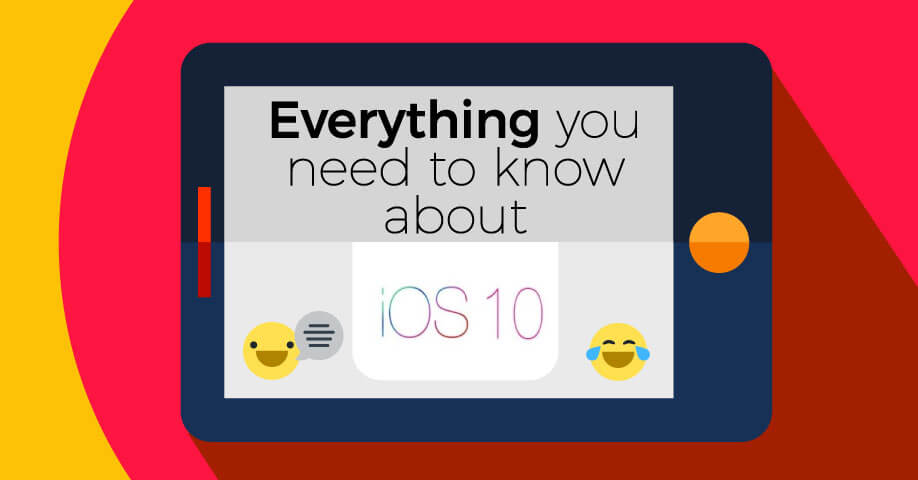 After being announced at Apple’s 2016 WWDC (Worldwide Developer Conference) iOS 10 is now available for everybody to try out in public beta. Released on 7th July, and recently updated on the 19th, there are a host of new features and functionalities to try along with some key changes over iOS 9. It’s likely that Apple will keep with tradition and release the finalised software update in Autumn (around the second week of September if past experience is anything to go on), but until then there’s a lot of exploring to do!

So whether or not you’re eager to try out the new beta, or you’re just curious about what features iOS 10 will have when it’s fully released, this article is going to provide you with a brief summary of the most important updates. If you’re a developer, the run up to launch is an opportune time to make sure that you eliminate any bugs and add new features accordingly. The beta 3 version is now open to everybody enrolled in the beta programme so make sure you download the latest version.

First off, let’s just quickly run through what you need to do to get started…

What is the public beta?

The “Apple Beta Software Programme” allows anybody who is signed up to try out pre-release software. Previously, only developers, who had to pay a $99 annual fee, were eligible to download versions of the beta. The new initiative was launched by Apple with the intention of gathering more feedback from a larger sample of people before “full” release.

If you are ready to take the plunge just head over to the programme’s sign-up page!

Wait a second! Which devices are supported?

Ok, now it’s time for some bad news. iOS 10 is not downloadable to all devices. Fortunately, Apple has published a useful table (pictured below) with all of the compatible devices listed. You’ll notice that any model older than the iPhone 5 isn’t iOS 10-ready. Only the 6th and 5th generation iPod touch is included. 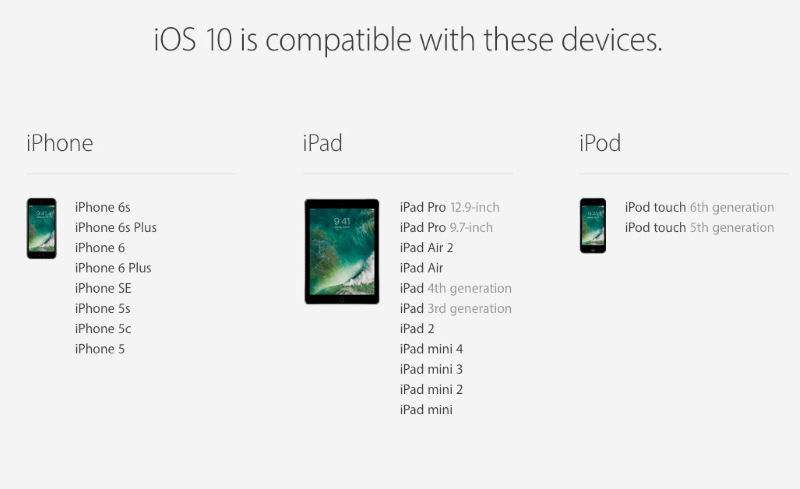 Before we dig into the new features, did I mention the need to back up? If I didn’t I’ll say it again: backup your device!

This is an interesting development from Apple and one of the major changes with iOS 10. The lock screen has been a major point of contention for a while amongst users and in this update the changes are far-reaching. The new “Raise to Wake” functionality takes users straight to the notification “lockscreen” upon picking up their iPhone. This allows them to avoid ending up directly on the homepage when they wake up their phone, which could only previously be done by clicking the home button.

This change is a precursor to a host of improvements in lock screen functionality. With iOS 10 it’s possible to respond to chats, check the progress of location-based apps like Uber and, of course, clear all notifications with one click, all from the lock screen. Control Centre is now also customisable too. The camera can be accessed with a right swipe…much better than that pesky little button in the bottom corner!

Emojis are about three times bigger in Messages. Which is good news if, like me you’re a die-hard emoji fan! There’s also an autosuggest feature which tells you which words can be replaced by those good old smiley faces. Rich links (such as those common to Facebook) are also now supported.

3. Siri is open for business

Prior to iOS 10, Siri was only able to provide help with native apps. One of the major changes with iOS 10 (and the addition of a brand new Siri SDK) is the ability to communicate with third-party apps. So where before you would only have been able to use Apple’s in-house helper to open facetime or check emails, now you can get it to look after your Whatsapp chats too.

Maps has been a long-time issue for Apple users. It seems that no matter what they do, it simply doesn’t stand up as competition to Google Maps. There’s a lot more automation in iOS 10, with suggested destinations and auto-population of locations from your calendar. One boast over Google is the function of automatic zooming, which keeps two locations on the same screen in a readable and sophisticated way. Maps is now open to developers too, so will integrate with third-party apps like Uber.

5. Getting serious about the internet of things 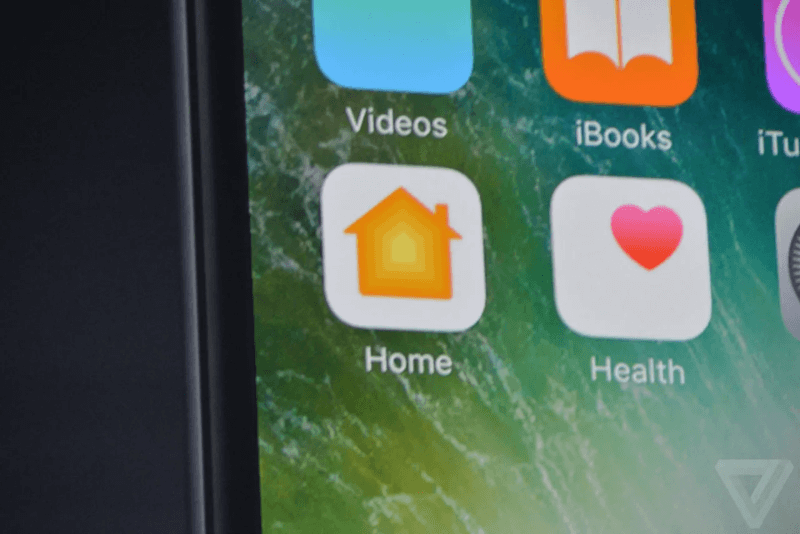 This is an important update. The “Home” app, which has been launched with iOS 10, is a single interface for managing all appliances that are compatible with HomeKit. There are some really cool features, such as “Scenes” which allows you to create a sequence of settings for appliances that can be activated with one click. Ready for bed? Just click one button to pop on the air conditioning, close the blinds, lock the doors, turn off all the lights and so on.

Other changes worth a mention

Quicktype has improved its ability to offer in-context suggestions when typing. Of particular note is that the feature is now able to draw data from third-party apps (seems like Apple’s keen on inclusivity in this update) to offer suggestions. So if somebody asks you where you are, for example, you may be prompted to auto-populate with your location.

The Apple Music and News interfaces have also been redesigned. The move is definitely towards minimalism and simplicity of use. Subscriptions and push notifications for major news alerts have also been included.

Apple will now automatically make a transcript of any voicemails so they don’t have to be listened to. Native apps can also be deleted…I don’t know why it’s taken so long!

What about Dark Mode?

One of the most talked about potential features that Apple were expected to include in iOS 10 was “dark mode”. This viewing mode was meant to include backgrounds, icons and lock screens that were designed to create a “nighttime ambience”. 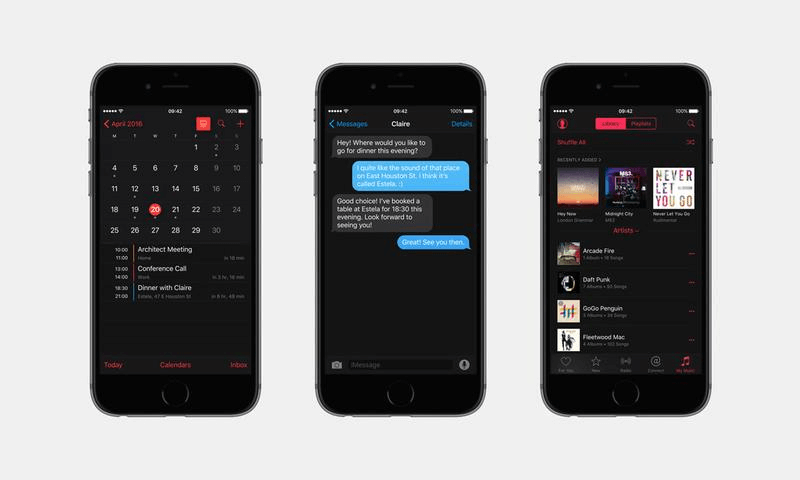 It is expected to be coming soon however! There are lots of concept images (like the one above) floating around the web. It’s an exciting feature, one that could potentially be integrated with lots of third party apps, like HomeKit, to tie in with the user’s daily rhythms and routines.

So there you have it! Our quick rundown of the top features of the upcoming iOS 10. What are your thoughts? Let us know in the comments section below.