Buy apps Blog App Creation Guides How much does it cost to make an app? Our massive research reveals it all

How much does it cost to make an app? Our massive research reveals it all 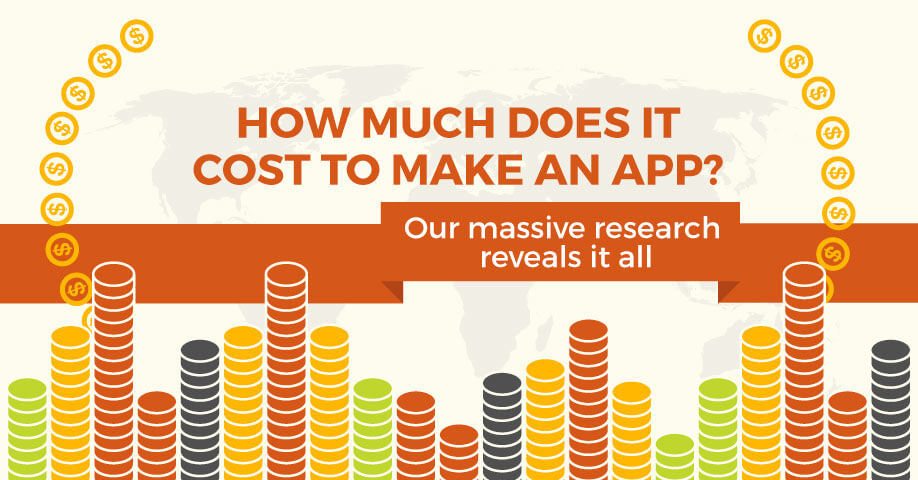 The app world is ever more demanding, take Tech Crunch’s word for it, which recently stated that 85% of consumers spend their time on mobile apps.

After relentlessly researching which apps perform best, you construct an idea about what you want to develop. It’s only a matter of seconds you start to wonder how much you need to financially invest in it.

You use an online calculator to help you make an estimate. After checking all the features you need your app to have, the digits you see before your eyes blind you.

“Apps are for rich people”, you say to yourself disappointed.

But what if we told you that you can make your rocking app?

After researching estimates on different mobile app calculators, we came to a conclusion that they not only offer zero help, but also create a false view of the cost of apps. We can rename them “marketing tools” rather than “calculators”.

Let’s burn those marketing curtains and reveal true estimates of the cost of mobile apps in the real world.

Taking a better view of each component of the developmental process provides a realistic overview of how much your app can cost.

Clutch surveyed 12 leading mobile development companies in order to determine the costs of developing an iphone app. They found that the median cost range is between $38,000 – $171,000 but can go up to as much as $500,000 (and even higher). 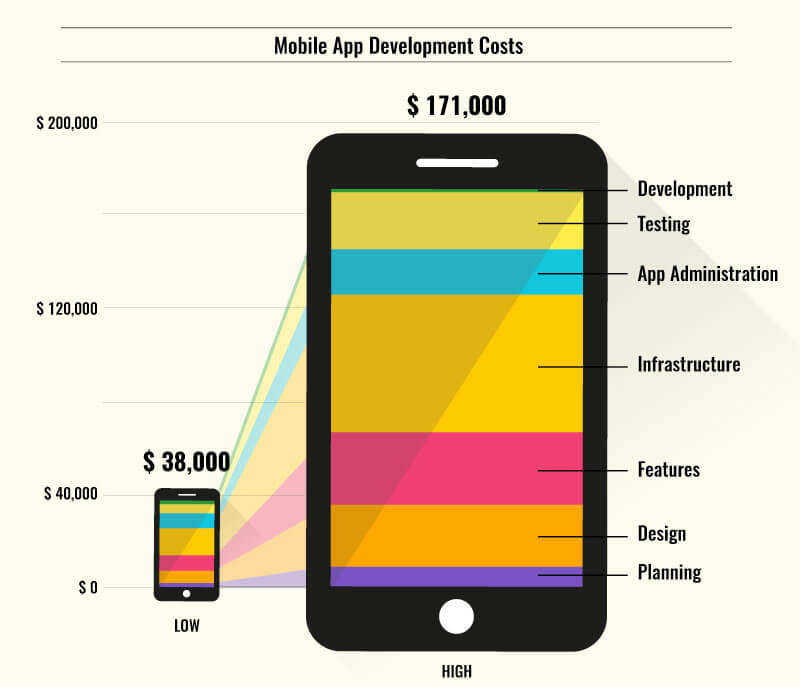 The survey didn’t apply other costs after the developmental process, such as maintenance and updates.

Below is a more detailed breakdown of each component of each stage of the developmental process. 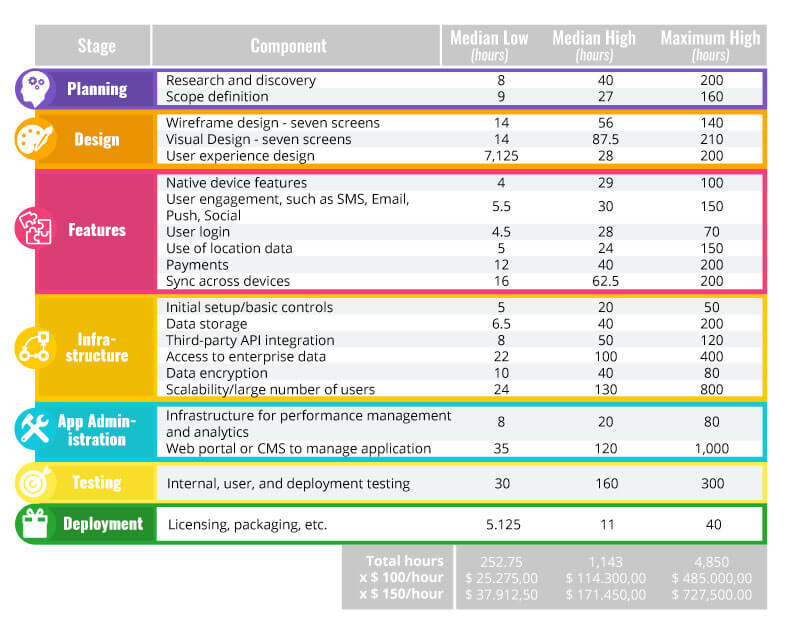 The planning stage consists of two phases which we will look at separately.

The number of features dictates the overall cost of the app. Here are some features that are worth mentioning: 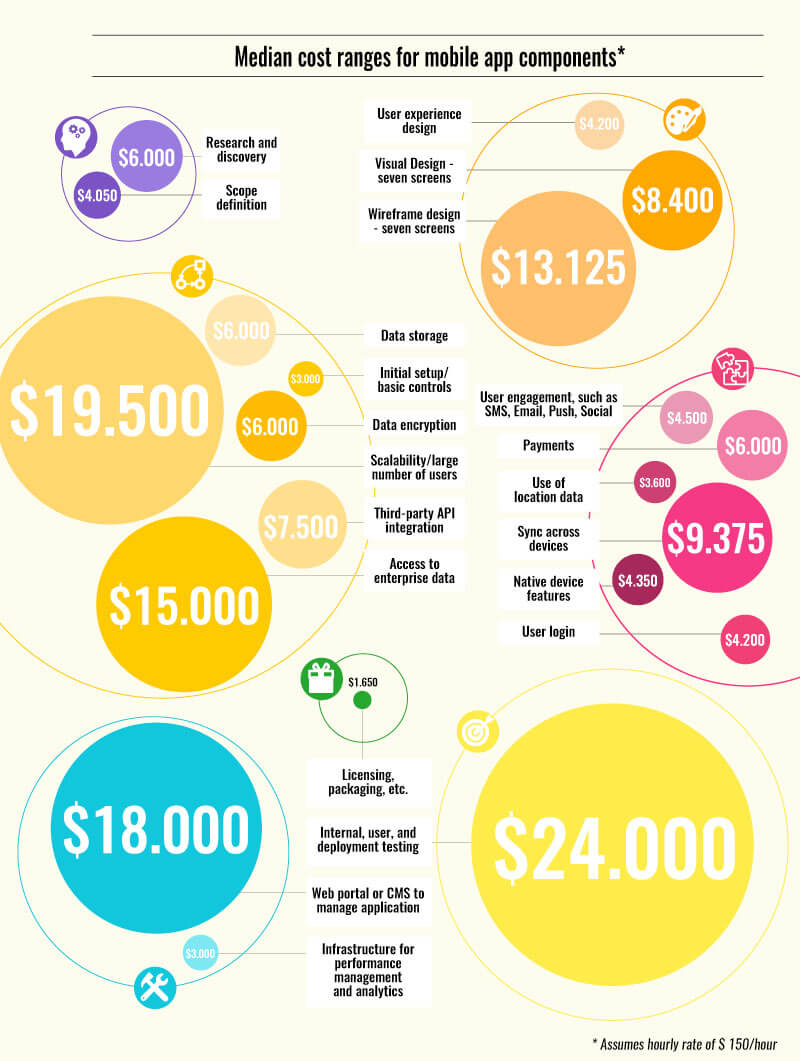 These are the results of another survey conducted by Kinvey in November 2014: 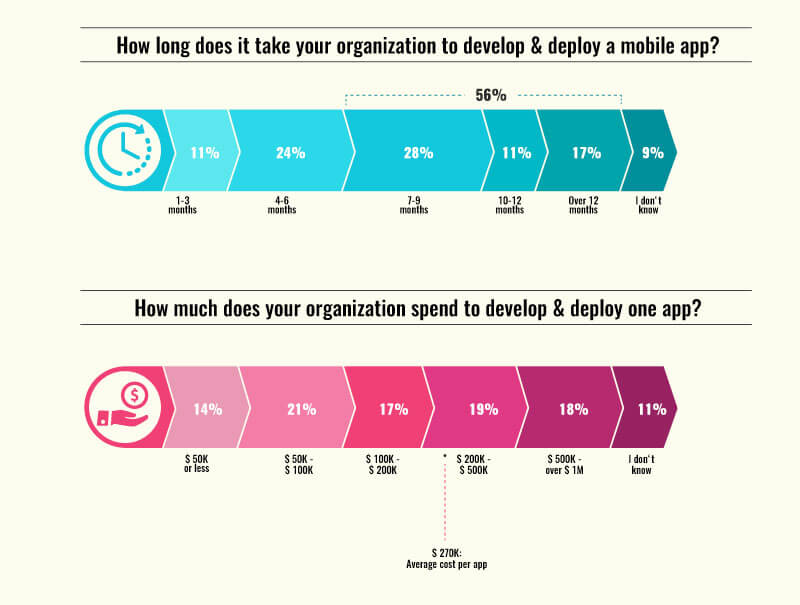 We said that you can afford your app, didn’t we? Here’s the interesting part. As we may know, not all mobile developers charge a $150 per hour rate. There is a wide selection of experienced and independent mobile developers around the world that charge a more reasonable price per hour.

Of course, finding an overseas developer may be risky, and it may take time to find the right one. You can expect quality on the team that you construct.

A market research by Yalantis showed the hourly fees of individual freelancers on Elance that provide IT and Programming services from around the world.

In order to receive a realistic view, we chose some of the leading markets for mobile development: Ukraine, Pakistan, Vietnam and the U.S.

We perceived the data that offered two rates per country, one moderate rate and another high quality rate. We then calculated the average of these two rates for each country. 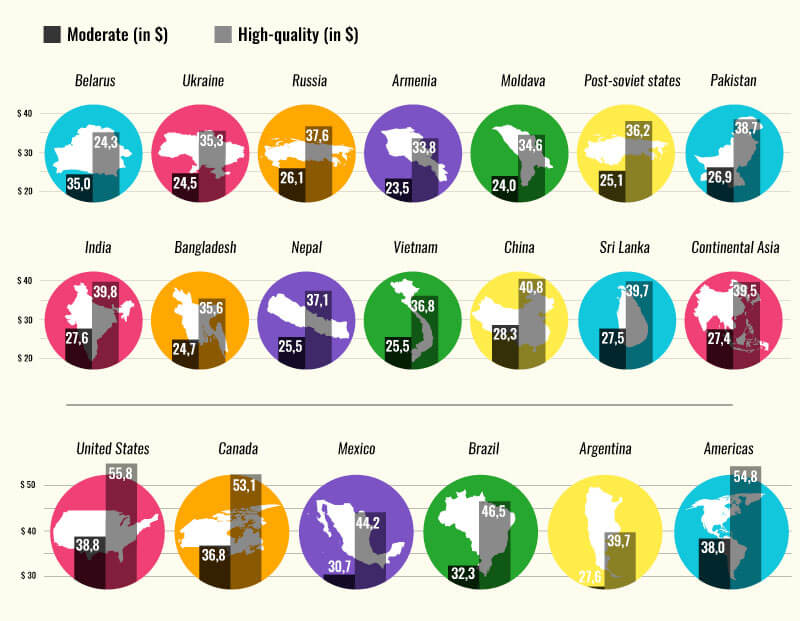 After calculating the average per hour rates of Independent developers from Ukraine, Pakistan, Vietnam and the United States, we then estimated the cost of each component (explained previously in the survey by Clutch).

For proportion, we calculated three costs: the median range (both low and high) as well as the maximum value. In order to visualize the data, we also constructed graphs for each country’s median low, high and maximum value.

These costs are more reasonable and show that you can hire Independent developers for any stage of your mobile project.

Soaring Digits On Online Calculators (Not So Helpful)

Many app developing companies now offer online calculators in order to offer an estimate of just how much you would need to invest to develop your app –which may crush your dreams.

We’ve looked at each feature and how much it costs to reveal some numbers. Unfortunately, the numbers we received weren’t so “realistic” as expected.

The otreva calculator offers many features which are divided among different platforms. We chose the most popular platforms, iOS and Android. The features are also divided in two parts, app features and admin features.

The imason calculator is very similar to the Otreva Calculator, except it offers features for developing an enterprise mobile app. The prices are only estimates, not actual quotes.

The Kinvey calculator estimates the cost of developing an app by yourself (DIY), but also offers a calculation of building the app in their BaaS platform (showing you how much you can save with them).

We’ve combined the total costs of all of the calculators into one table in order to review all costs an round up an average cost for both iOS and Android platforms.

The average sum of both the minimum and maximum DIY and Kinvey platform costs were calculated to offer an average estimate.

Of course, these calculations are based on these three calculators only. Also, some calculators had more features than others. For instance, the Kinvey calculator offered a wide range of features and many options to each feature. That’s why we chose the minimum and maximum values — the combinations were endless.

On the other hand, the Imason calculator offers a less amount of features. 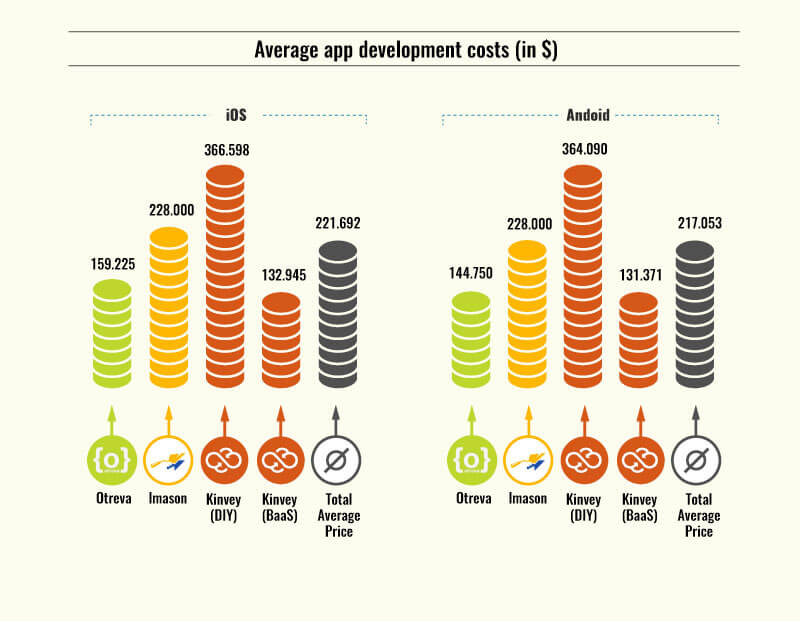 We also compared the features that both the Otreva and Imason calculator had in common. The reason that we didn’t feature the Kinvey calculator was because it didn’t offer the costs of each feature, just a total cost. 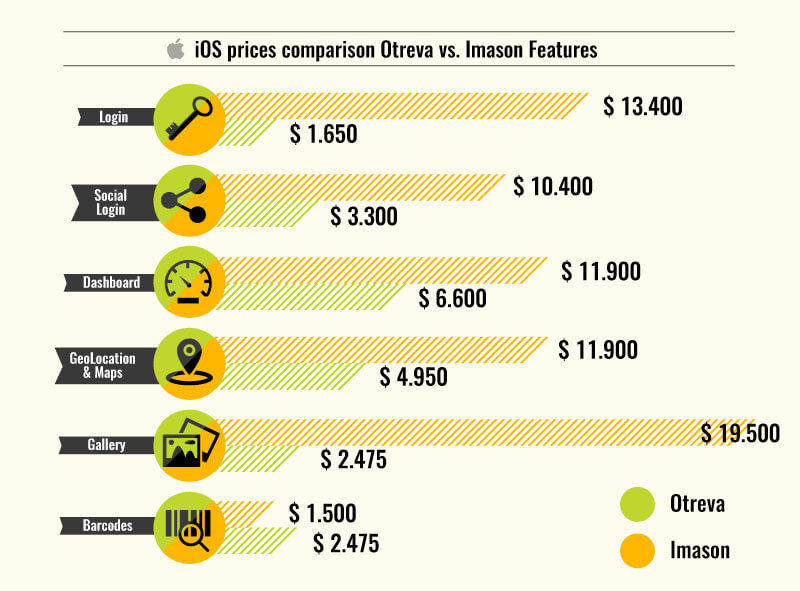 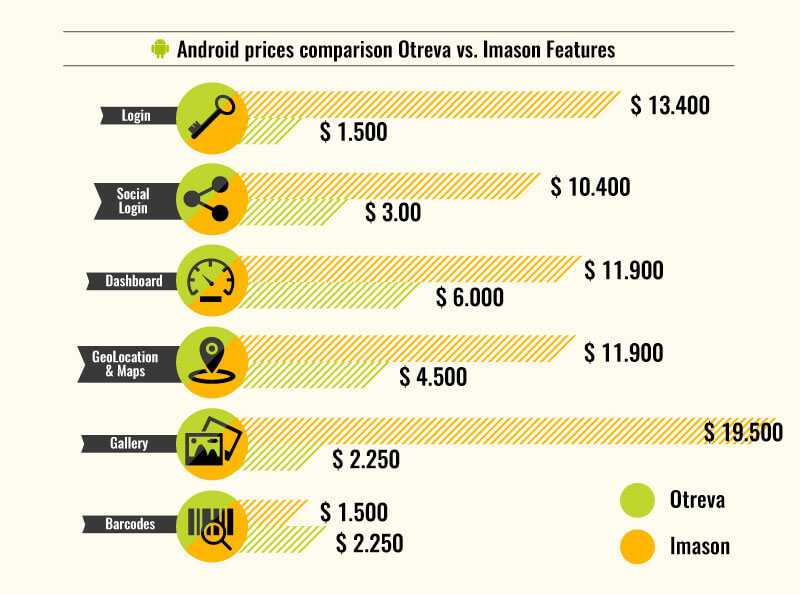 What we concluded was that the Otreva calculator seemed more realistic, while Imason and Kinvey showed estimates that soared up to the sky. These graphs just look silly and only prove that they seem like more of a marketing tool rather than a helpful calculator.

Stop there if you thought that the developmental costs of an app are ALL you’d be investing in. The reality is that there are more costs right after you develop the app, and you really need to consider them for the functionality of your app.

Developing the app is just the tip of the iceberg.

A Forrester report claims that you should set a higher budget for your mobile project. An average amount of $50,000-$150,000 that are usually spent for the development process are only 35% of a two year cost.

Updates can be a considerable ongoing cost, and AnyPresence surveyed enterprise mobile development professionals on how often they update their apps. The survey found that 80% updated their apps twice a year and a third even at least once a month. 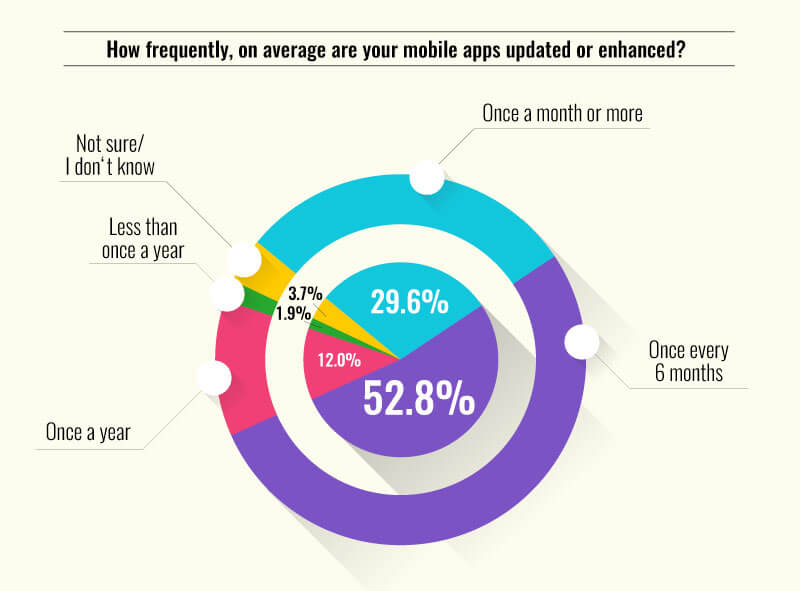 Other costs apply to maintaining the app, such as bug fixes, improvements as well as enhancements to improve user experience. This is important for user loyalty and even the smallest fixes show users that you care.

Try to develop a maintenance plan to schedule updates, this can keep your costs down.

As we mentioned before, games are one of the most downloaded types of apps. An important step in your mobile project should be a planned out idea of exactly what type of game you need. This may take a considerable amount of time, but in the long run, it can save you on costs.

Here we have three types of games to give you an overview of the budget and level of complexity for each. 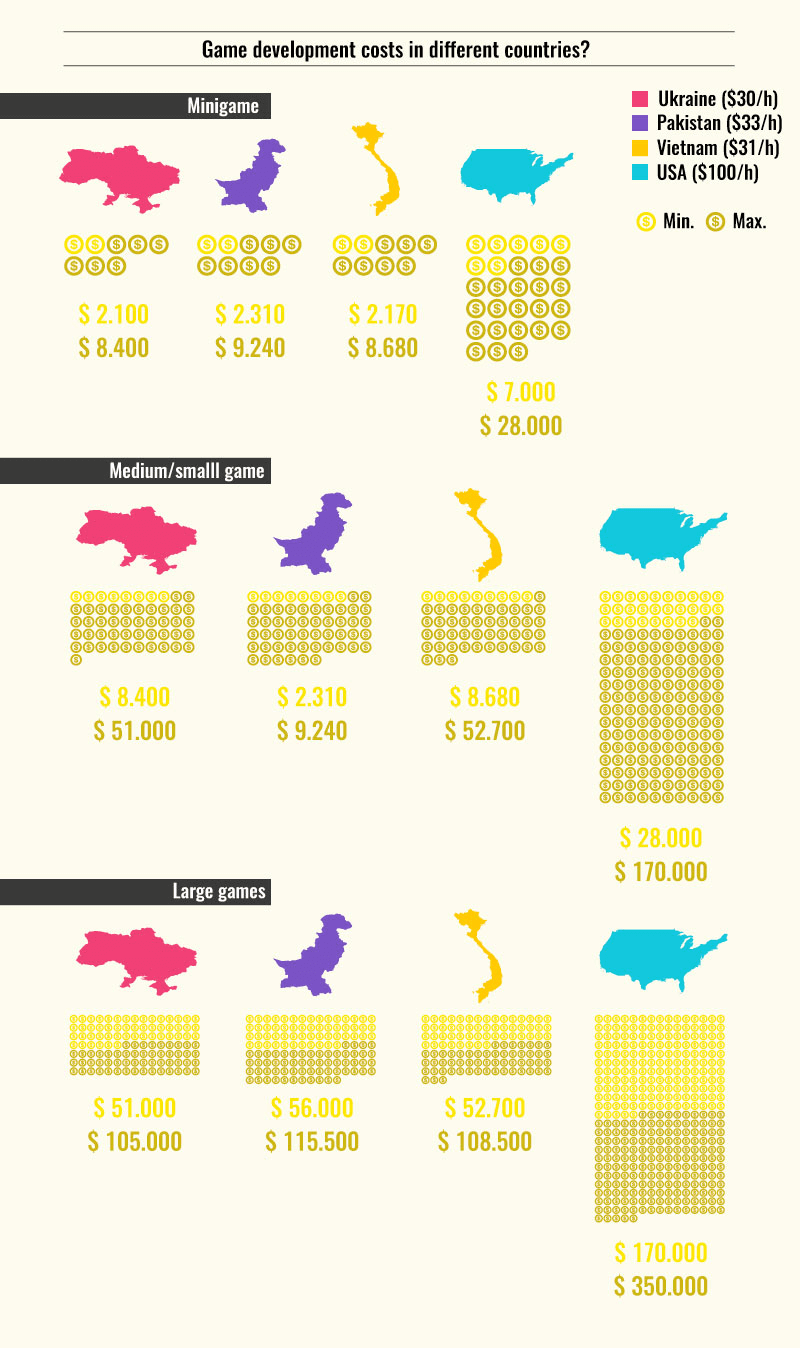 It’s also important to mention that it may take a significant amount of time to put together the right team for your project.

Buildbox has soared high in the App Store as the first ever game building engine that doesn’t require a single line of code! Founder, Trey Smith, says that most of their customers don’t have any programming experience.

This allows anyone to create a mini game without having programming skills. An app developed in Buildbox called Color Switch even became the most downloaded game in the App Store in over 100 countries.

What’s even cooler is that Color Switch was developed in only 30 minutes! This new “buildbox revolution” is truly democratizing game app development, allowing anyone to make a mini game in less time and zero frustration.

By thinking ahead and knowing exactly what kind of an app you want, you can cut any unexpected costs that may occur when you don’t have this thought-out well. It’s hard to make a clear budget estimate, and it depends how experienced the developers are and if you are hiring an in-house agency or outsourcing freelancers.

Independent developers from around the world offer more reasonable prices than many high end agencies.

And most importantly, you, like many others, can make your dream app without being super rich.