What Appreneurs Can Learn About Monetization from Pokemon GO 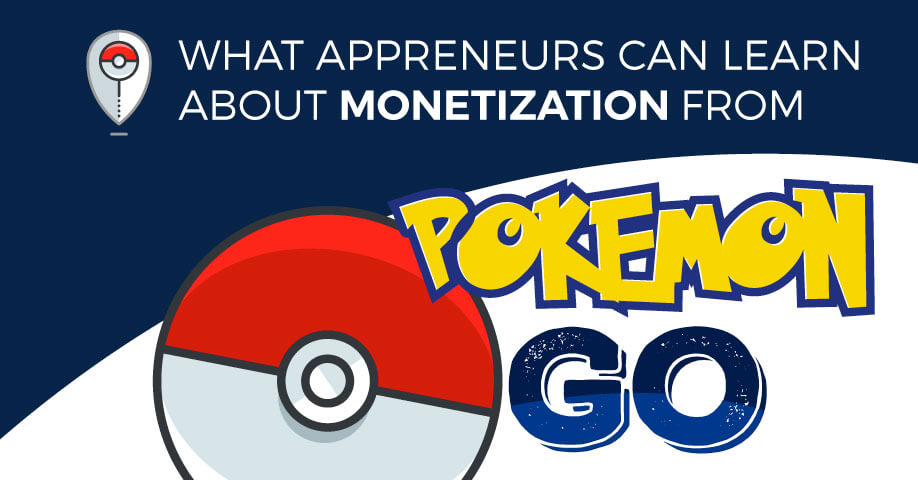 As of July 13th, Pokemon GO is the biggest mobile game in history. Given the fact that everybody (I mean that in the literal sense) is playing it and that it’s been plastered across every newspaper and news channel in some form, it’s world-beating success will probably come as no surprise. The only difference is that now we have the data to back it up. 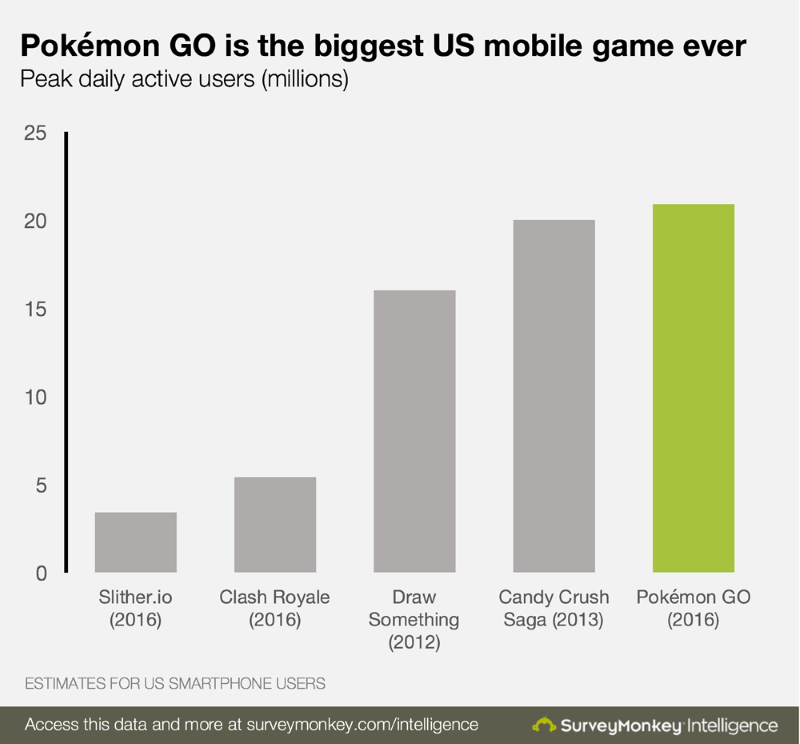 By all accounts, Pokemon GO’s meteoric rise to fame and success has been both unique and startling in equal measures. It shot to the top of the app store in 24 hours and easily outpaced Clash Royale as the biggest game of 2016. Within a few days it had more users than Tinder. The share price of Nintendo went through the roof and, as you can see from the graph below, as of 11th July, it was well on it’s way to outdoing Snapchat and Google Maps! 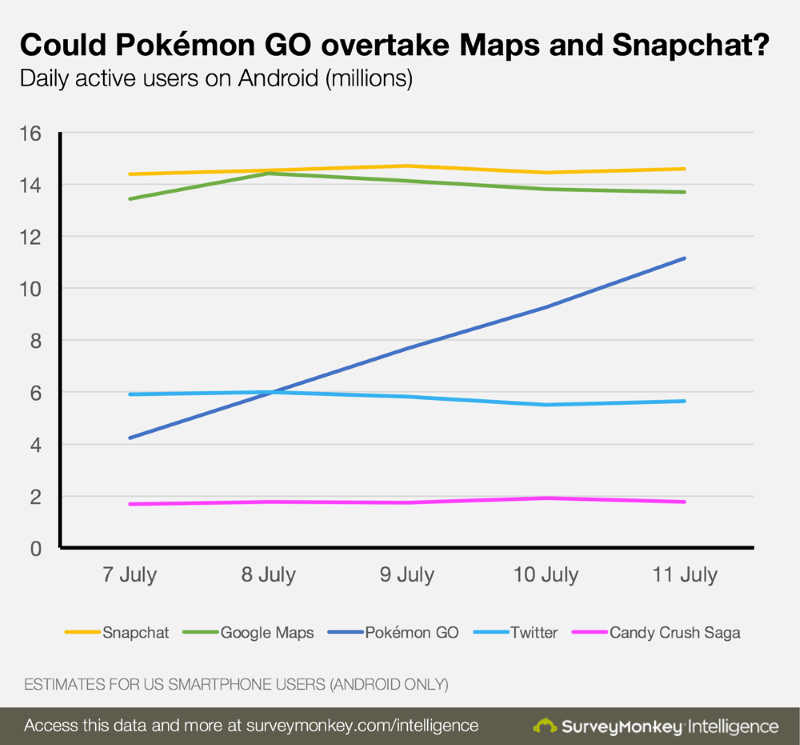 All of this said, and despite the significant hype and media sensation that is still growing around Pokemon GO, it’s still too early to say for certain whether or not it’s going to be a standout long-term success. Already Nintendo’s share price, which owns a small share of the publisher company Niantic, has dropped and warnings about over-optimistic earnings projections are already surfacing.

Ok, so with the necessary disclaimer out of the way, in this article we’re going to take a look at some of the monetization methods that Pokemon GO is using to fuel millions of dollars in earnings every day. Though you’re momentously unlikely – you never know though, right? – to have a successful app of the same calibre as Pokemon GO, there’s still a lot you can learn about monetization from it.

Just what is Pokemon GO?

If you’re like 90% of the world, you probably won’t feel a need to read this section…due to the fact that you’ve been building up practical experience for the last two weeks! It is worth, however, just taking a few moments to dig deeper into some of the specifics of the gameplay, whether you’re a hardcore fan or not. 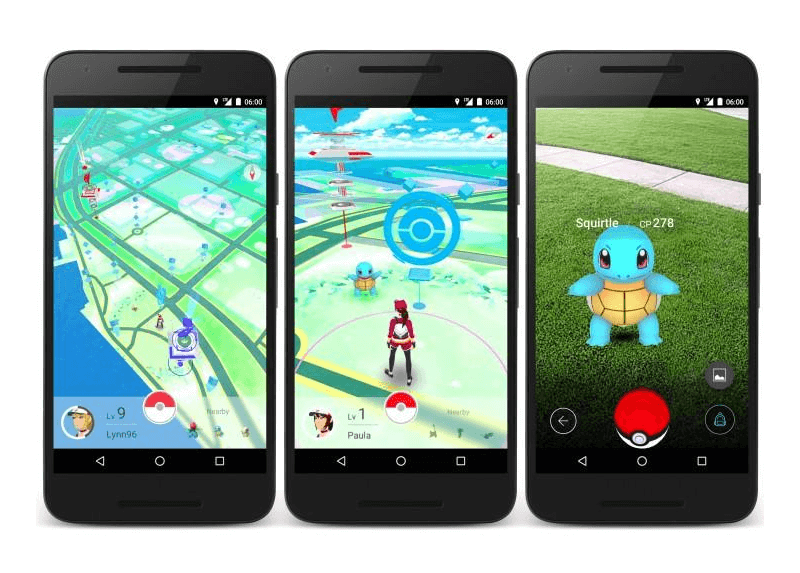 On a basic level, PokemonGO involves moving around in the real world using an in-game map. When you get close enough, you’re alerted to the presence of nearby Pokemon, which you can see through your phone’s camera viewer. You can then attempt to catch any Pokemon by throwing a Pokeball. If successful, it will be added to your Pokedex, a catalogue of all the Pokemon in your collection.

Pokemon Gyms are semi-permanent locations where you can train and fight with all the Pokemon that you’ve caught. You can battle other players to win Pokecoins, the in-game currency, which can be redeemed for useful items in the Pokestore.

The other main in-game locations are Pokestops. These are the places (usually tied to well-known landmarks) that you can use to get free items. You can pick up Pokeballs, medicines, eggs and snacks for your Pokemon.

A quick look at the stats

We love statistics of all kinds here at SellMyApp, so let’s have a quick look at some of the main facts and figures that highlight the game’s success. You can see an interesting comparative breakdown of Pokemon GO’s standing on AppInstitute’s website. Here are some of the key stats that will give you an idea of what the current picture looks like:

● Nintendo’s value rose by $23 billion in the first week after Pokemon Go’s initial release. This was the biggest jump for the company since 1980. After Nintendo announced that it only owned a small share in partner company Niantic, the share price slumped, but it still remains at an all-time high.
● US downloads peaked on the day of its release (July 7th) with the number at 6 million. The biggest day in terms of usage was July 14th, with over 25 million people clocking in. That’s equivalent to the entire population of Mozambique! 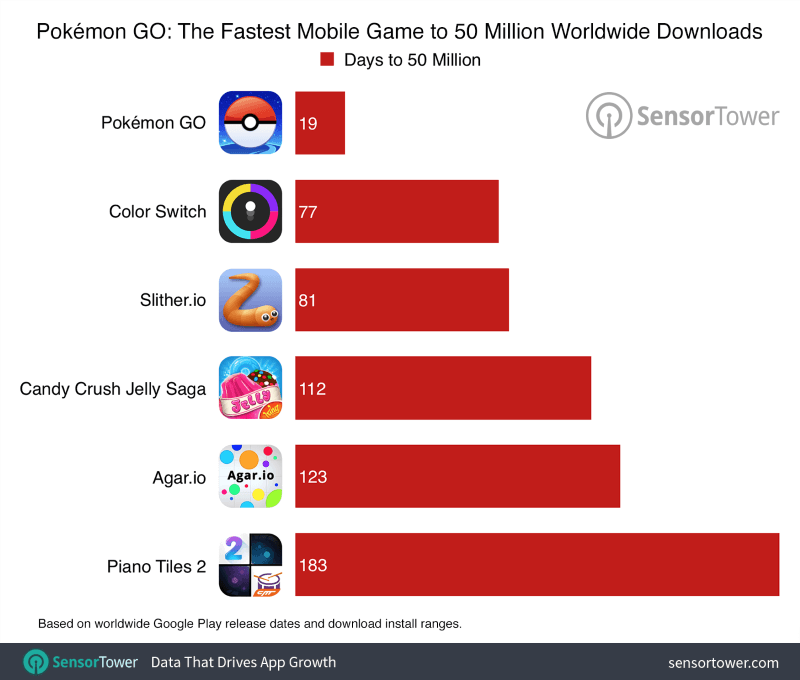 ● After finding that it was located on a Pokestop, the managers of one cafe (Maxwell’s Bar and Grill in Covent Garden, London) saw an increase in sales of 26%. The management has also been making use of “lures” (more on those in a moment) to draw more customers in. One New York cafe has even reported an increase in sales of 75%.
● Nick Johnson was the first person to catch all Pokemon with at least one confirmed sighting in North America. He’s now off an international trip to fill his Pokedex with non-native specimens.
● As of July 11th, Pokemon GO was making around $1.6 million in daily revenue from the iOS store alone.

Pokemon GO is utilizing a two-pronged business model to generate revenue, capitalizing on both a huge user base and businesses that can take advantage of wandering players. We’ll look at the business side of things in a moment. The player-side of Niantic Lab’s monetization model is somewhat traditional in its approach. Players are able to speed up and improve gameplay by making in-app purchases through the Pokemon GO store. 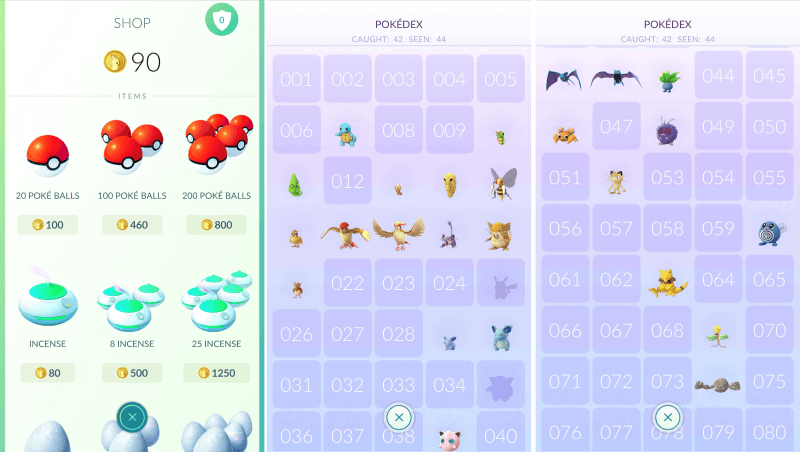 What’s interesting and unique is how in-app purchases are tied in with the gameplay and the effort-reward cycle. Players are given a generous amount of starter items, including storage, pokeballs, eggs and so on. The key insight here is that to progress with the game at later stages, when investment is already high, players need to buy extra storage or “bag space”. These are low-cost purchases that ensure all “serious” players, even if they’re not keen on buying unnecessary items, are monetized in some way.

The second point worth mentioning is that Pokemon GO isn’t shy about giving out lots of freebies.In many ways the monetization model is a gentle one. You can pick up Pokeballs (along with a host of other collectibles) from Pokestops and also acquire a range of free items whenever you level up. The quality of the items increases as you progress through higher levels, so there’s a strong incentive to keep playing (thus increasing investment) to access these rare items. 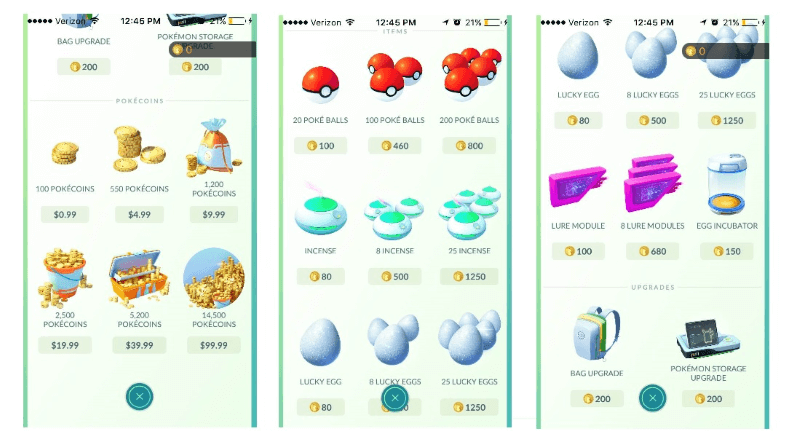 The actual list of items available through the “Pokestore” is also quite limited. This is interesting in the sense that there’s little chance that players will be overwhelmed with the range and number of items on offer. Below are all the items that are available:

The way that Pokemon Go is targeting businesses is very clever. Along with “incense”, which players can personally use to attract Pokemon to them, there’s also the option to purchase a “lure module” (the only item available in the Pokestore which isn’t listed above). Unlike incense, which only brings out more Pokemon for the player specifically, lure modules can be attached to a particular Pokestop and will attract Pokemon for all the players that are interacting with it. What’s more, that particular Pokestop is advertised to all nearby players.

You can see from the map below that that a Pokestop on which a lure module has been used is surrounded by pink “glitter”. 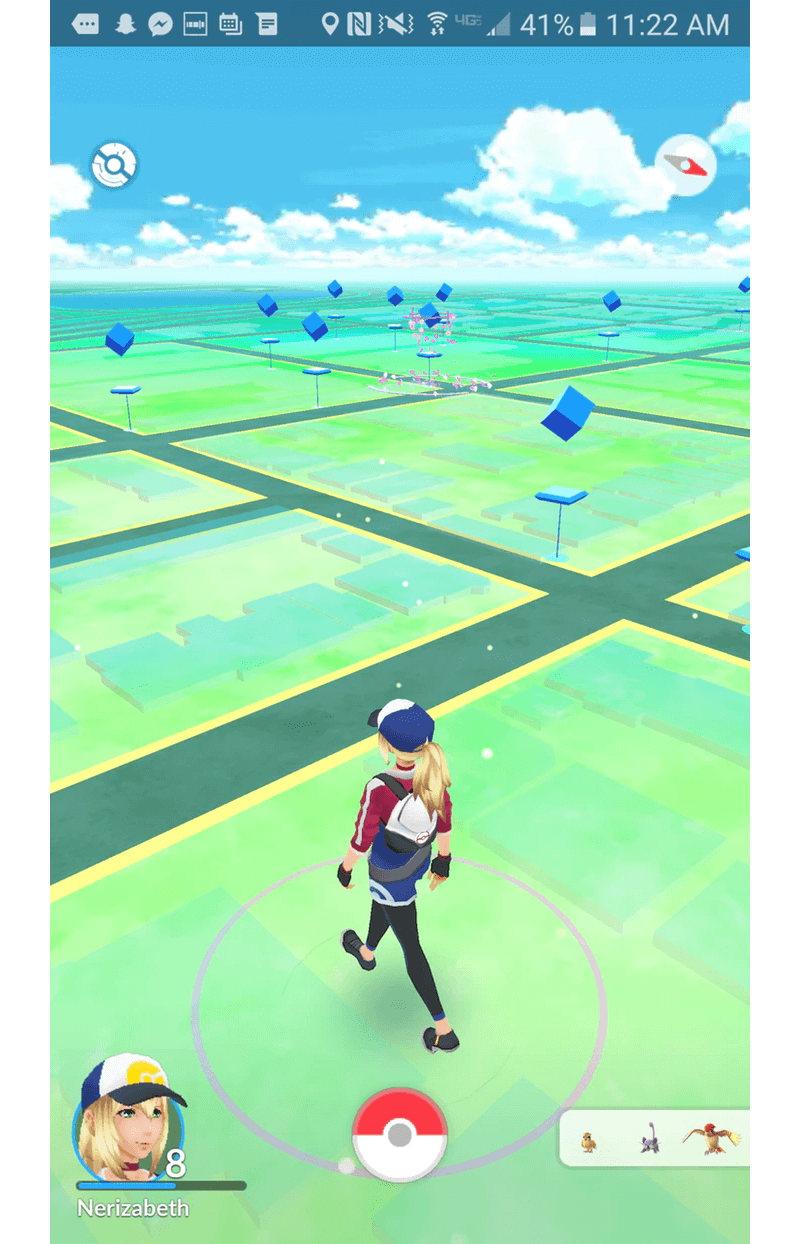 The reason this works so well for businesses is because certain cafes and stores are also Pokestops. By buying lure modules, the managers and owners of these stores can attract a stream of new people. As you can see from the stats cited above, doing so can often lead to a big increase in sales!

You might well be asking, “How does this transfer over to my app?” The key takeaway here isn’t to offer a real-world location-specific element to your game. Rather it’s to determine if there are any ways of including elements in your game that can include businesses. If you have a large user-base in a particular city, for example, could local businesses sponsor your app for a certain period? Might you be able to set up regular gaming events in well-chosen locations?

A quick word about Pokemon plus

Although it’s still early days, Niantic has also announced a foray into physical products.Their wearable Pokemon Plus “badge” will allow players to be alerted to nearby Pokemon without having the app open on their phone. Many apps, including Doodle Jump and Clash of Clans, have realised the benefit of offering physical branded products. 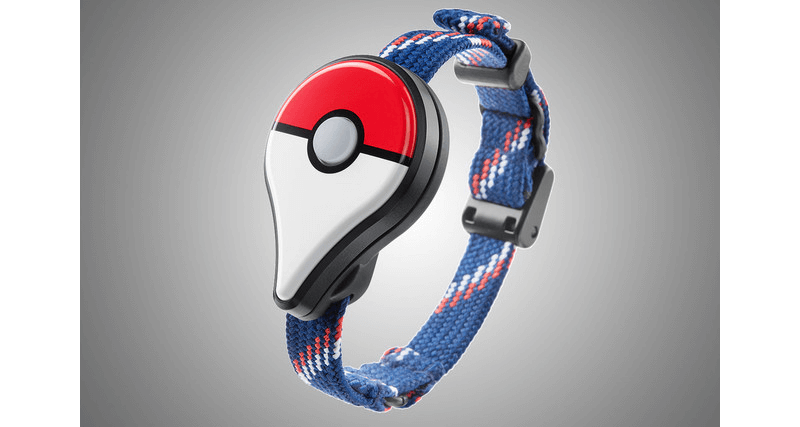 Conclusion – What can you learn for your apps

Let’s wrap up with a few practical pointers. There’s a lot of debate about whether or not the monetization models underpinning PokemonGO are replicable. It’s an entirely unique game and relies on a type of augmented reality gameplay that few developers can mimic.

That said, I think there are a few key pointers that should be kept in mind:

So there you have it, our look at PokemonGO’s monetization techniques. Don’t forget to check our mammoth guide to in-app purchases out! Let us know what you think in the comments section below!